Diving into this story is the focus of two brothers who have been through an extraordinary event together. Their father left them when they were both young, and their mother took ill and passed away shortly after. In an attempt to bring their mother back to life by using alchemy, the oldest brother, Edward, lost his arm. The younger brother, Alphonse, lost his entire body. In the heat of the moment, Ed was able to put his brother’s soul in a suit of armor in exchange for one of his legs. Edward was only 12 years old while his brother, Alphonse, was just 11 years old. The two brothers were taken in by their family’s old friend, Pinako Rockbell in their moment of need.

The military soon found out about what happened since attempting to bring the dead back to life – ‘Human Transmutation’ was outlawed from the practice of Alchemy. This is how Colonel Mustang and Lieutenant Hawkeye came to know the two Elric brothers. Mustang saw just how talented and possibly gifted Edward was and chose to offer him the ability to pursue alchemy in the highest form: as a State Alchemist. Edward Elric was just 12 years old when he got his state certification. He became to be known as the Full Metal which was his State Alchemist title. Becoming an official dog of the military was just in pursuit on a way to get their original bodies back. This goal led Edward and Alphonse to a very special object: The Philosopher’s Stone. 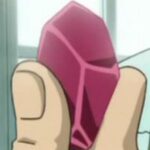 Winry Rockbell lost her parents to a very famous war when she was young which forced Pinako Rockbell to care for her. The two Elric brothers quickly became like family since they lived so close by and went to school together. When Edward lost his arm and leg, Winry created his automail limbs for him and maintained them constantly through the series. She becomes a love interest to Edward later on in the series and is often seen close by, supporting the brothers in their journey to find the stone. As always thanks for reading a Gamma’s Scribe article!