Welcome! In this brand new article category we will be introducing various animes and maybe there will be a few you would like to watch as well. However there will not be any kind of huge spoilers – so don’t worry! The first anime review is based on: Noragami. So let’s dive right into the anime! Noragami (eng. Stray God) was published for the first time in 2010 as a manga series. The series is written and illustrated by Adachitoka and mostly appeared in the monthly Shonen magazine. The manga series has a total of 24 volumes. Currently there are two seasons which include 12 (season one) and 13 episodes (season two). There are rumors for a third season coming soon.

There once was a Stray God..

Yato has quite a tough life as a God. He spends his days writing down his telephone number on walls and all kind of places in attempt to make people notice him. In order to make him famous he accepts any wish from his clients in exchange for 5 yen. After his weapon partner decides to desert things really start to look grim for Yato.

Yato then runs into the middle school girl named Hiyori Iki, who saves him from being hit by a bus. After the accident Hiyori realizes that her soul now frequently slips out of her body. Furthermore she learns about the “Near Shore” where regular humans reside as well as the “Far Shore” where demons and human souls linger.

Hiyori then asks Yato for help as he brought her into this situation. Together they meet a new Regalia (a weapon from a dead human soul, named by a god). The young boy is introduced as Yukine in his human form. Together the trio starts their journey.

Yato is the male protagonist who often calls himself “Delivery God” has the huge dream of being acknowledged by as many people as possible. Therefore he wants to build his own shrine so people can worship him.

Yato has dark blue hair and light blue eyes and is always wearing a navy tracksuit together with brown boots. His favorite piece is a fluffy scarf in a faded blue which he always wears around his neck.

Yato can be quite unpredictable and often acts childish and guillible. Although he wants to archieve his dream of having a own shrine, he can barely afford a normal life for himself and his regalia’s. He often spends money on gambling and drinking.

Despite being known as a “God of Calamity” there are also examples of Yato being strong-willed and forgiving. However he does distance himself from people who attempt suicide as he feels remorse for the Shinki (who later become Regalia). 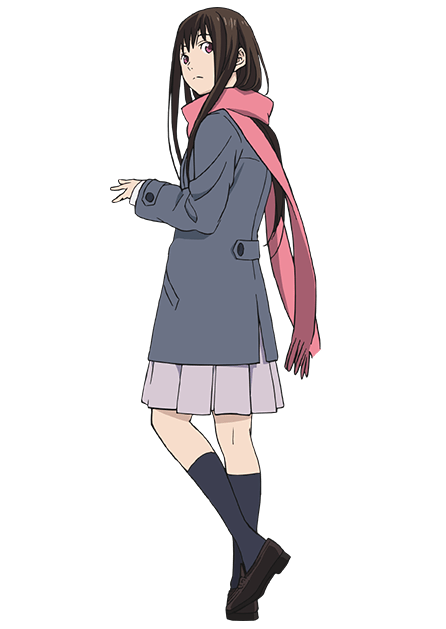 Hiyori Iki is the female protagonist of the series. After a car accident she became a half phantom as her spirit can slip out of her body.

Hiyori has pink eyes and long brown hair. If she turns into a half phantom a pink cat-like tail emerges from her lower back. Hiyori is often seen wearing her school outfit which consists off a purple blazer together with a light purple skirt. She also wears black knee-length socks and brown shoes. During cold times she often wears a pink scarf.

Hiyori is a normal school girl with a huge interest into wrestling. She is brave and often does not hesitate to jump into action despite the danger of her tail being cut off, which would result in her death. She is pure and honest and often states her opinion about things, she doesn’t like people deciding for her and prefers following her heart. Yukine is the Shinki of Yato and one of the three main protagonists. He is also acting as a guide for Yato.

Yukine in his human form appears as a young teenager with blonde messy hair and orange colored eyes. In his first appearance Yukine wears a white robe. He later wears a sky blue hoodie together with baggy jeans and a white hat. In his vessel form Yukine is named “Sekki” and can turn into a silver Odachi. The handle of the sword is wrapped in bandages.

Yukine is at first very cold and heartless. He is very frustrated about his early death and deeply jealous of humans who take their life for granted. As people have a hard time noticing gods and shinki, yukine starts robbing people and stealing things not knowing that there are harsh consequences.

All pictures are copyrighted and belong to their respective owners. They are used in a way that qualifies as fair use under US copyright laws.

Did you enjoy our first article about anime? Please let us know what kind of anime articles you would like to see in the future in the comments below! wake me up inside

this was the first real anime i ever tried to watch. i basically forgot about its existence. i should watch it for real someday